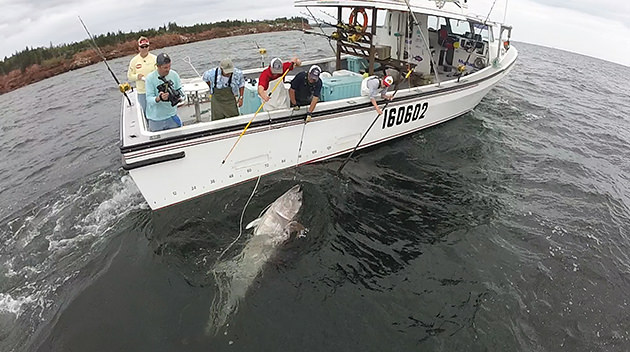 If you ever wanted to catch a 9ft Tuna approaching and even eclipsing 1000lbs, not only is PEI the place, and Bruce Brothers the guys to put you on them, but now is absolutely the best time in the history of the fishery. Prince Edward Island is one of the most unique and beautiful places I’ve ever been to in Canada. The people are wonderful and the scenery is straight out of The Sound of Music. Throw in the Giant Bluefin that swim often LESS than a MILE off the beach and this BigWater Adventures is all but in the can. The giant Bluefin as a species is a very difficult fish to gauge. The conventional wisdom is numbers are way down and these giants often appear and disappear in cycles from year to year. It’s never been better in PEI and though we hope this primarily catch and release fishery lasts forever, NOW is the time to catch your Grander with Bruce Bros. Besides being amazing Captains with 100’s of Granders caught and released to each of their credit, Capt Jamie and Capt Troy Bruce and their family run business are quality people and a blast to be around.